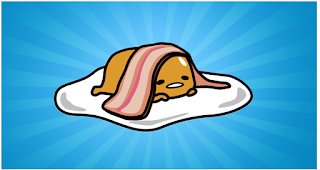 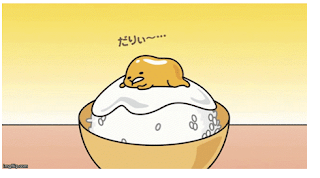 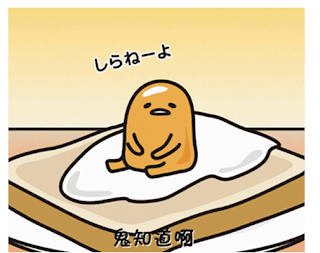 He’s lazy. So lazy. He lies around in bed all day, and generally won’t move unless prodded with a giant stick. Drop him in boiling water, and his reaction is to sigh and accept his imminent doom. His bare ass is nearly always hanging out. He’s a goddamn superstar.
That’s Gudetama, or Lazy Egg, Sanrio’s newest cartoon character and its biggest hit since Hello Kitty, the mouthless cat-girl whose most noteworthy quality is that she wears a hair bow. Since his launch in 2013, Gudetama’s apathetic yellow face has appeared on nearly 1,700 items, from pencil cases to luggage, to full-body costumes. That’s incredible success, especially for a company that’s struggled over the past two decades to create a follow-up to its powerhouse Kitty. But why is an anthropomorphic piece of food the one to hit the big time, let alone a lumpy yellow egg with a butt and a bad attitude? It’s complicated.

Life in Japan has been filtered through a layer of cartoon for hundreds of years, from the 18th-century origins of manga, to the first anime of the early 1900s. Unlike comics and cartoons in the West, they’ve never been just kids’ stuff; the earliest manga books were stories of life in Japan’s red-light districts, and contemporary works don’t shy away from adult situations either. Japanese cartoons tend to reflect what’s happening in the world right now, and in this moment, what’s happening is food. “Gudetama’s popularity is equally an obsession with food as it is kawaii culture,” says Manami Okazaki, author of Kawaii, Japan’s Culture of Cute.
If cartoons have been around for centuries, kawaii is what made them big business. Kawaii—literally a combination of “cute”/”lovable”/”pitiful”—began in the 1970s as a high-school trend; kids changed their handwriting to a childlike scrawl studded with hearts and smiley faces, and adopted babyish language and actions to go along with it. Parents and teachers were dismayed, but as the years passed and those teenagers grew up, the posturing childishness stuck and infiltrated daily life. With it came a cult of cuter, more innocent cartoon characters, starting with Western imports like Mickey Mouse and the Dutch bunny Miffy, and hitting its stride in 1973 with Hello Kitty and her roly-poly Sanrio squad of penguins, bunnies, and flying cloud-puppies.


n 2014, Sanrio pulled in $6.5 billion in licensing fees to put its characters on everyday home goods, from toilet paper to toasters. Now, companies know that adding a cute mascot (known as yuru-kyara) to whatever they’re selling—even boring, thoroughly grown-up products like home insurance and savings bonds—will help it sell. Every prefecture in Japan has its own mascot to boost regional tourism and make a few extra bucks on swag. Since 2010, yuru-kyara have even had their own pageant—in 2014, more than 1,700 characters participated.

Because the competition is so stiff, the pressure is on to keep generating new characters that will resonate in the over-saturated Japanese market. At one Sanrio competitor, every employee is required to design a new kawaii character every month. Gudetama himself was the result of an in-house contest to come up with a food-based character. He came in second to a slice of salmon (he was robbed!) but handily trounced more than a dozen others, including Soygeisha, a makeup-wearing block of tofu, and a bread-panda named Omupanda.


“Japan has a long history of making food aesthetic, and merging food presentation and art,” says Okazaki. “Given that kawaii is one of the most prominent contemporary movements and resonates with most youth in Japan, it isn’t much of a surprise that food merged with kawaii design.” Food has also been lurking on the sidelines of kawaii culture from the beginning—it’s just never been in the spotlight before. The first major food character, a man with a bread-roll head named Anpanman, was created in 1973, and for years he was a culinary anomaly, an Oscar Meyer weinermobile in a land of Vespas. Sweets and fruit have been an aesthetic component of kawaii —Sanrio’s in-house newsletter is called the Strawberry Times—but Gudetama represents the first time a straight-up piece of food, and a savory one at that, has been the center of attention.

What makes Gudetama stand out even more so is his attitude. While most kawaii characters’ personalities range from polite obedience to manic cheerfulness, Gudetama just can’t seem to give a fuck. Like a ’90s standup comedian, he says what we’re all thinking—a revolutionary concept in the highly repressed, work-obsessed Japanese culture. Partially because of this nonchalance, and because of that whole naked butt thing, he’s also considered part of a new kawaii subculture called kimo-kawaii, or gross-cute, which is resonating more with underground youth culture than the sweetie-pie characters of yore. Kimo-kawaii’s biggest star is Gloomy, a murderous bear who routinely disembowels and eats his little-boy owner. He’s adorable.

In the West, where weird for the sake of weird is a well-established marketing technique, kimo-kawaii characters are a natural fit. The U.S., especially, has a longstanding love of characters with bad attitudes (remember hip-hop Looney Tunes?). Gudetama’s 120,000 followers on his English Facebook page attest to his popularity outside of Japan, as does his command of Sanrio’s largest YouTube viewership.
It doesn’t hurt that the unofficial motto of Internet food culture is “put an egg on it,” either. Gudetama is often pictured as part of a composed dish, his little face peering out from a roll of tamago or an egg-salad sandwich, and easily half of the #Gudetama Instagram results are home-cooking attempts to recreate these scenes. Sanrio cafés around Japan and beyond market Gudetama meals, and last November, they partnered with L.A. restaurant Plan Check for a special three-course dinner. When a Hong Kong café came up with a Gudetama-shaped steamed bun that could vomit or shit custard, it was reported on around the world.

“The abundance of food in kawaii culture points to the burgeoning affluence of Japanese youth and their growing leisure time post-WWII, where eating and cooking food gradually became regarded as hobbies,” says Okazaki. “I think you need a certain degree of affluence to find things like Gudetama amusing.”